One of the recurring topics or subjects in the Cuban visual arts, from mid-twentieth century to the present day, has been the rooster, as part of the exploration of identity, or as representation of virility and strength. Wifredo Lam, Eduardo Abela, Carlos Enríquez, Mariano Rodríguez... The roosters depicted by these artists, in addition to having been included in the most relevant temporary and permanent art exhibitions, have been a sure bet of the auction houses.

The National Museum of Fine Arts of Havana houses in its rooms some of the most representative pieces that explore this subject, such as Eduardo Abela's iconic “Guajiros” —oil on canvas, 1938—. Sotheby’s auction house made available, between May and June 2020, an oil on canvas by Carlos Enriquez dated 1955, entitled “Pelea de gallos” (Cockfight), which was sold for $ 100,000.00.

Meanwhile, Christie’s New York included in its Latin American Art Auction last July 30th the piece entitled “El gallo y la gallina” (The rooster and the chicken, ink and gouache on canvas, 1955) by the extremely well known painter Wifredo Lam, which was sold at $ 200,000.00. It is also important to refer to the avant-garde artist Mariano Rodríguez, known as “the painter of the roosters”, with pieces on this subject at the Museum of Modern Art in New York (MoMA)—“El Gallo”, oil on canvas, 1941—, the Los Angeles County Museum of Art, LACMA —“El gallo pintado” (The Painted Rooster), oil on canvas from 1956—and the National Museum of Fine Arts in Havana—“Gallo amarillo” (Yellow Rooster), oil on canvas from 1956—.

“Pelea de gallos” (Cockfight), by Mariano, dated 1942, was sold at Sotheby's for $ 1, 087,500.00. This record placed him among the small group of the four Cuban artists who have overcome the million dollar barrier in public auctions along with Wifredo Lam, Mario Carreño, and the centenial abstract painter Carmen Herrera.

Mariano Rodríguez and Roberto Fabelo, with different pictorial styles, are the two Cuban visual artists who have undoubtedly addressed the subject of roosters more frequently. Roberto Fabelo does it within magical realism, where his work is usually immersed.

Recently, Christie’s New York auctioned the oil on canvas “Viaje al Jardín Fantástico” (Journey in the fantastic garden) by Roberto Fabelo, which represents the artist himself sitting between two female characters and all on a rooster immersed in a dense garden. The piece reached a price of $ 399,000.00. This sale confirms Fabelo as the Cuban artist that lives in his country of birth whose work is best valued in the international art market. 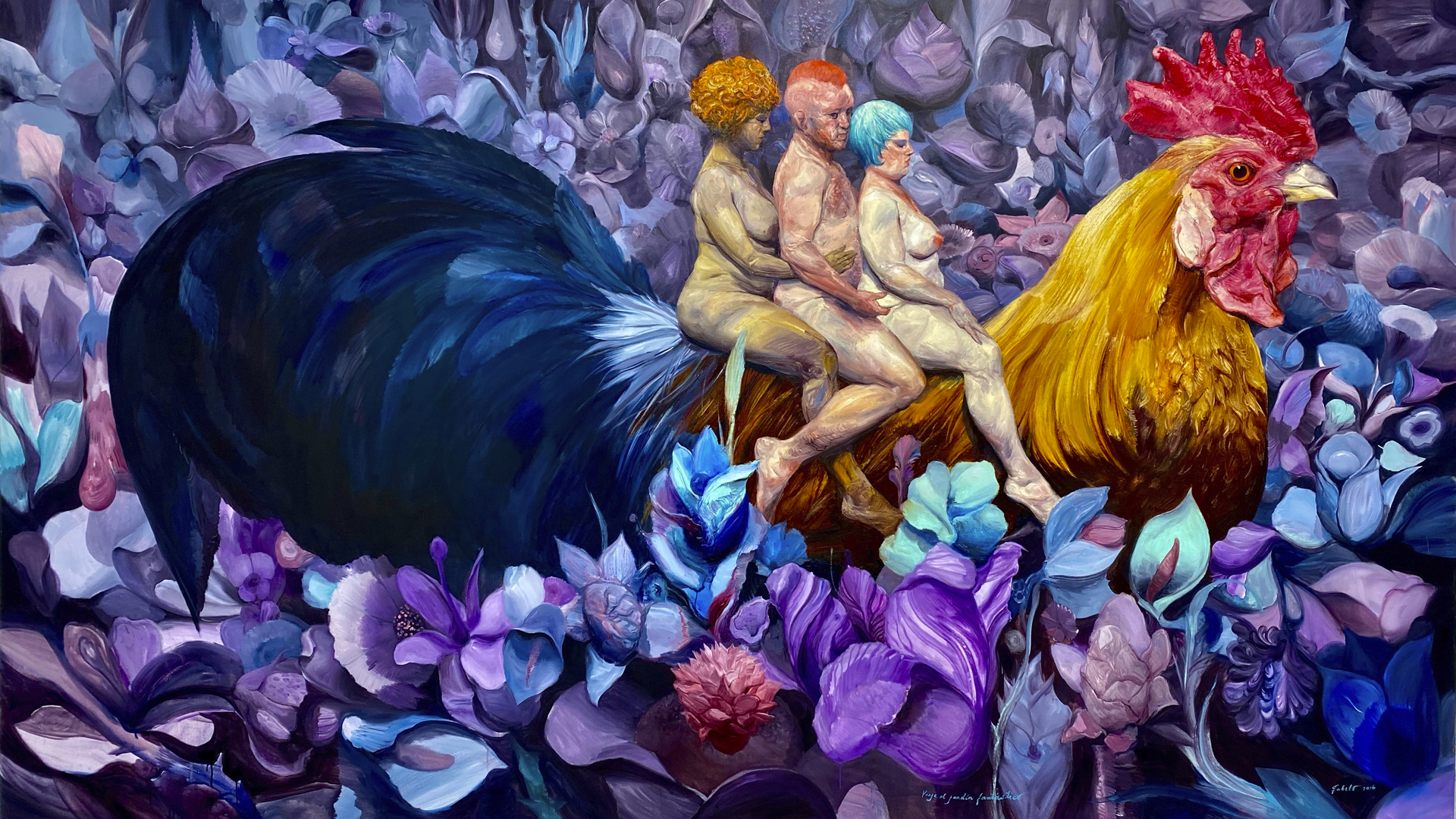