The presence of Latin American artists in the main auction houses' big events continues to increase. Records are set for the work of many artists at auctions dedicated specifically to mid-century and contemporary art from the region. The visibility, that "healthy noise", that quality that gives art the potential to be scrutinized, evaluated, or admired by more and more individuals, some of them buyers, shoots up high. In a world where short stories and shocking images go viral through platforms accessible to millions of users (social media), the impact of art is no less. It can not and should not be less. Due to its symbolic content, but also for the value of a work of art as an investment.

Recently, at Christie's Latin American Art Auction, two records were awarded for Cuban artists, both alive and at the height of their careers. These artists were Tomás Sánchez and Roberto Fabelo. Undoubtedly two of the poetics that lead what has been called "Cuban art". Two poetics with the same root, exploring different paths.

The hammer price for Fabelo's artwork was just under $600,000, nearly triple of the low estimate Christie's set when launching the work in its catalog for the March 10 auction in New York. The piece, a triptych entitled "Perrerío", is a set of portraits of individuals on whose heads lie dogs of different breeds, apparently calm. The expressionless faces of the three men contrast with the tension or violence that what lives in their minds seems to be about to unleash.

A text by Donald Kuspit accompanies the piece in Christie's catalogue. Kuspit explores the artwork by including references to psychoanalysis, which suggest the multiple readings that the triptych can unleash. We reproduce Donald Kuspit's text below.

"Perrerío" is a piece from 2018, and it was the fourth best price achieved in the March 2022 edition of the auction. 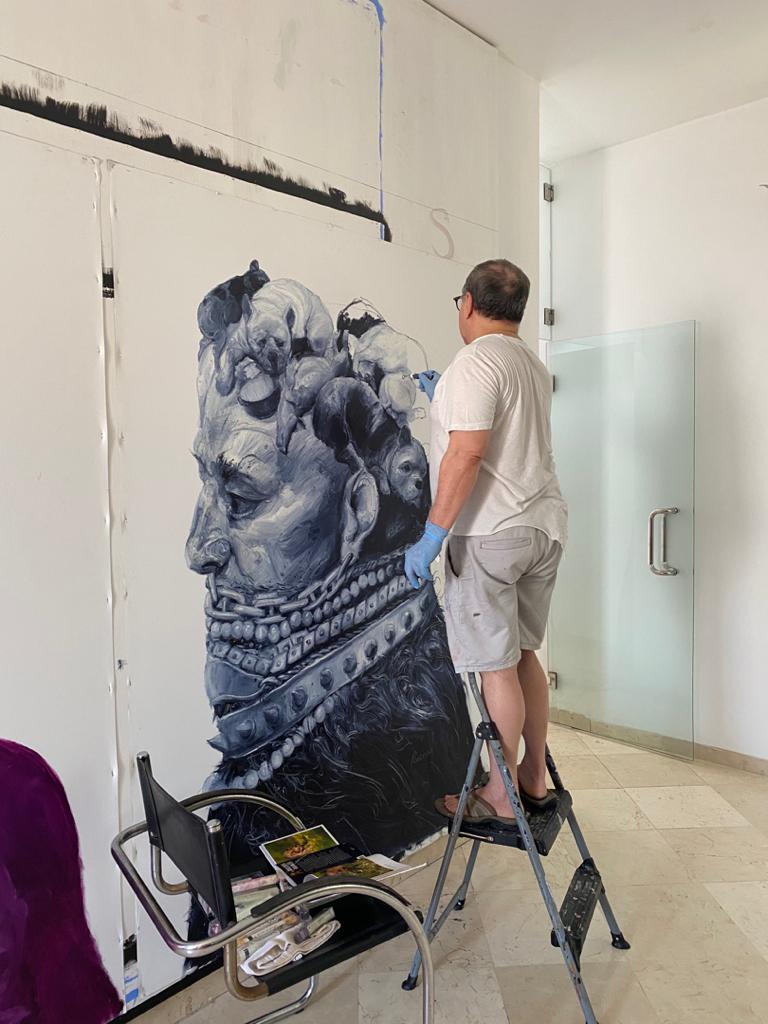 “Perro” is the Spanish word for “dog,” and “perrerio can, colloquially, refer us to a complex mess, where barking, confrontation or abandonment generate a tension that in the case of the triptych titled ‘perrerio’, turns into human heads as a scene of conflict.”  In other the words, the three heads in the triptych are psychological portraits--psychological portraits more insightful than any the Surrealists made, for they are neither displays of “pure psychic automatism” nor “dream and reality” reconciled in “surreality,” to allude to Breton’s definitions of Surrealism, but insightful explorations and articulations of madness, more particularly the paradoxical relationship between feeling and power, the effect of authoritarian hubris on the psyche.  “Power corrupts, and absolute power corrupts absolutely,” Lord Acton famously said—corrupts the psyche absolutely, one might add, that is, makes in prey to madness, as Fabelo shows.

All three of Fabelo’s figures, their faces expressionless compared to the teeming mess of manically expressive dogs in their minds, are in effect possessed by what object relational psychoanalysts call bad objects in the phantasy form of vicious dogs. One knows the expression “dirty dog,” a particularly despicable individual, and the expression “mad dog,” a particularly crazy individual--“Son of Sam,” the New York serial killer who felt commanded to commit murder by his neighbor’s dog Sam, was both—and one also knows “there cannot be a mythology which does not associate a dog, be it as Anubis, T’ien k’uan, Cerberus, Xolotl or Garm, with death, Hell, the Underworld,”(1) and with that the devil. Anubis was dog-headed—he had the head of a wolf, bringing to mind the saying “man is a wolf to man,” that is, preys on other men, and bringing to mind lycanthropy, the belief that one can change into a wolf and behave like one: St. Christopher was said to be a dog-headed man feasting on human flesh until he meets Christ. A dog may be a domesticated wolf, but remains a vicious wolf at heart. 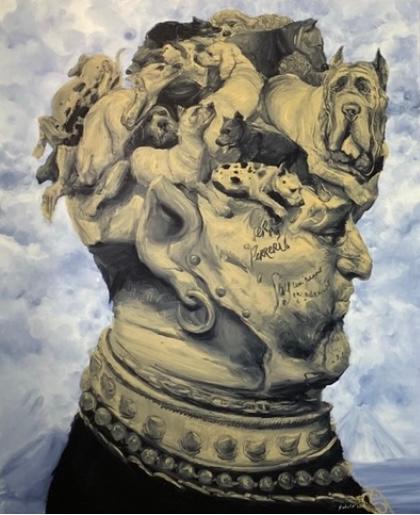 Fabelo’s three figures are possessed by the devil in the form of dogs—mad, dirty dogs, symbolizing the social fact that they behave like mad, dirty dogs—ruthlessly violent dogs, “animal instinct” unrestrained, as Fabelo suggests. Or, as Freud would say, the death instinct, in the form of aggression and hatred, without the life instinct, in the form of libido and love. Fabelo notes “our empathy with these creatures that have accompanied us even since ancient times”—they have served as psychopomps since antiquity, and are typically symbolized as animals, guiding newly deceased souls from earth to the afterlife without judging them—but his dogs are not empathic companions of his great men but vicious predators on his psyche, emblematic of his paranoia, indeed, passing paranoic judgement on him. Fabelo’s figures do not dream of dogs, they are dogs in monstrous human form. The dog is their attribute, their coat of arms, the symbolic embodiment of their insanity. It is chained to them and they are chained to it, as the chains around the necks of all three figures suggests. It is not the ”golden chain that hangs down from the vault of Heaven to the Earth” that Homer celebrated in the Iliad, but the “chain of office” and the “chain put around the necks of prisoners, slaves, and domestic animals,”(2) suggesting that Fabelo’s three officials are chained to the dogs that possess them—dare one say tyrannized by the devilish dogs, emblematic of their viciousness—and as such not the self-possessed masters they appear to be, but predators who feed on other human beings, which is perhaps why the body of the central one, with his blood-red body, is so luridly flat. They are prisoners of their position, and as such not as autonomous as their grandeur makes them seem to be.

Fabelo’s figures may all be rabid dogs, ruthlessly aggressive, authoritarian killers, lords of the underworld, but their grim, inexpressive faces are made uncannily expressive by way of their vivid color: a sort of murky yellow on the profile of the left figure, sky-blue tinged with light on the profile of the right figure, and pinkish red on the full face of the central figure, the left side of his face blotted out by dark shadow, suggesting that he is more sinister than his companions. Noteworthily, his eyes are closed, the eyes of the other two figures are open, their faces are smooth and his is rough, and seems to be crumbling. Is he Beelzebub, a symbol of gluttony, as his fatness suggests? Is the blue figure Lucifer, a symbol of pride, as his expression suggests? Is the yellow figure Satan, a symbol of wrath, as his expression suggests? Wittingly or unwittingly, Fabelo is suggesting that his rulers are sinners. The triptych is the standard format of an altarpiece, suggesting that Fabelo’s triptych is an altarpiece for the worship of the devil rather than God, for his figures are damned rather than the saved. 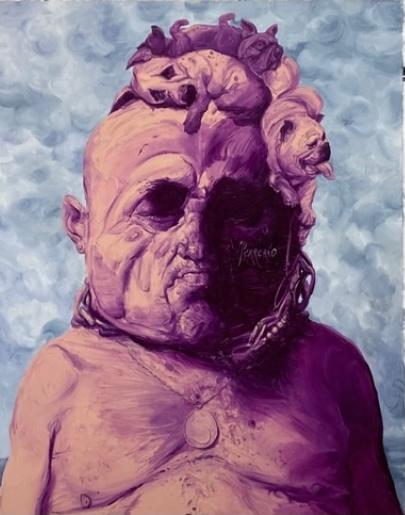 But the atmospheric clouds in the background, alive with movement rather than dead-pan like the rigid figures, seem to promise heaven—certainly they are a vivid contrast to the figures. They are densely painted epic characters, emblematic of hell on earth, at odds with the heavenly atmosphere, painted with lyric, spontaneous gestures. The difference shows that Fabelo is as much a master of painterly impressionism as of expressionistic figuration. Strange as it may seem to say so, Fabelo’s compact figures embody the “storm and stress”—what else do the wild dogs convey?--of the so-called Junge Wilde. His confrontational portraits can be regarded as an ironic take on the grandeur of Old Master portraits and the intimidating insidiousness of Neue Sachlichkeit portraits. His three figures may be surreally absurd, but more to their point they have the epitomizing seriousness, intensity, and critical power of modern German figurative art. Like it, Fabelo’s three portraits engage madness head on. They are social realism with a critical vengeance. Along with his figures in The Fly’s Discourse, 2014, also a triptych, and also with authoritarian types driven mad, by flies rather than dogs, and also wearing chains that could double as hangmen’s nooses, Fabelo has made major, profound political statements about the authoritarian strongmen that threaten us all, the mentally sick, not to say insane, demagogues who threaten democracy. His portraits are testimony to the devastating effect of the ruthless will to power on the individual and society. 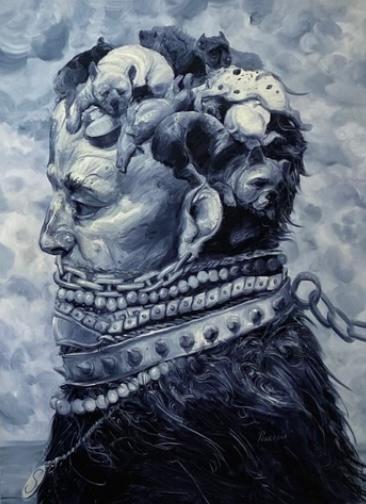